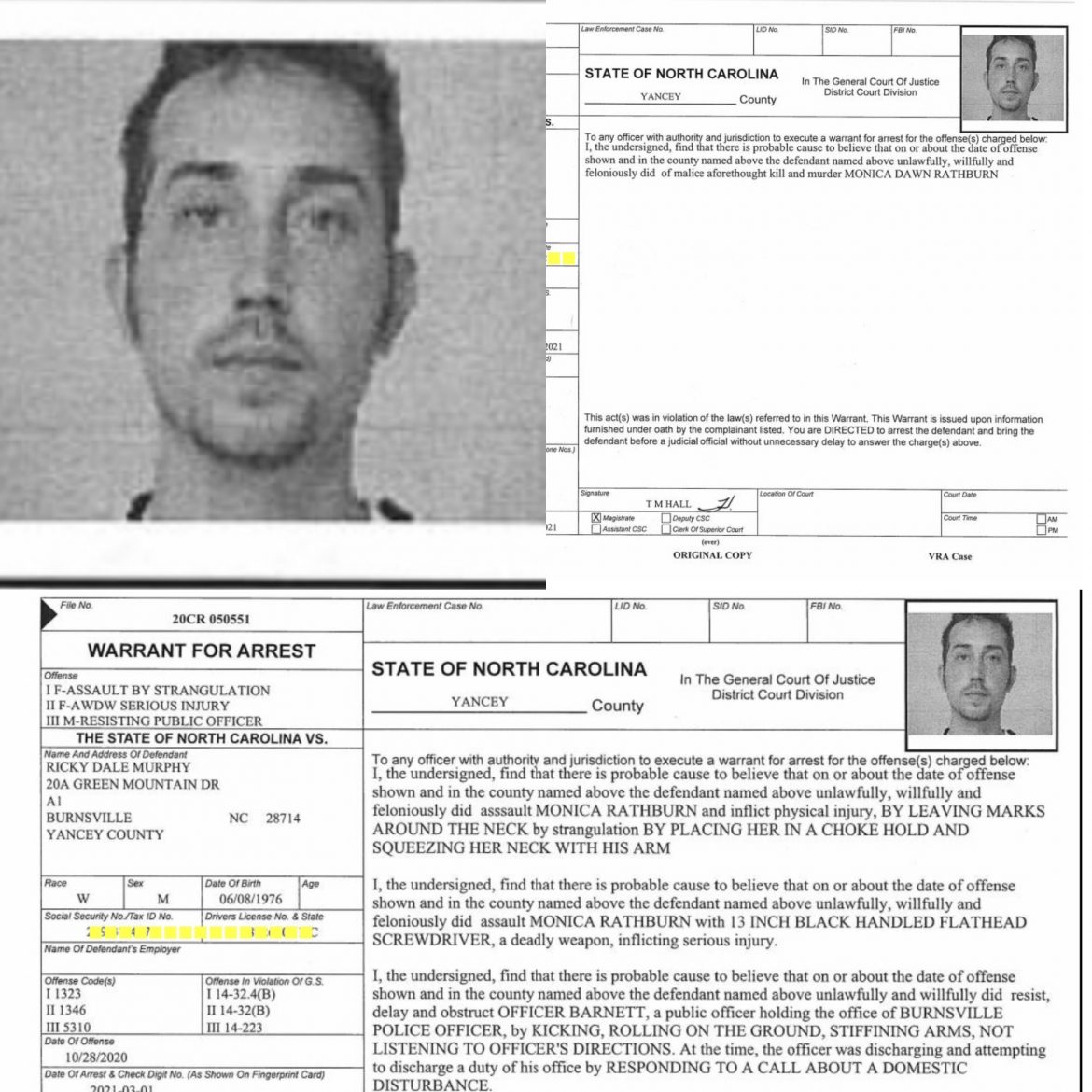 unthankfully According to the arrest warrant, Ricky Dale Murphy, alledgedly killed Monica Dawn Rathburn.
The Burnsville Police can not say much, as it is an ongoing investigation, but did confirm the SBI has been called in to help with their crime lab.


A previous warrant for Ricky Dale Murphy was on October 28th 2020. The warrant says Murphy  assaulted Monica Dawn Rathburn by strangulation, assualt with a deadly weapon inflicting serious injury, and resisting a public officer. The warrant says the Murphy left marks around the neck of Rathburn by placing her in a chokehold and assaulted Rathburn with a 13 inch screwdriver. An officer was called to the scene responding to a call of a domestic disturbance. The warrant says that Murphy kicked the officer and resisted arrest.

Sources, that want to remain anonymous but are family members of Monica Rathburn, say the murder was “heinous and wicked”. One source said, “He cut her head off and other parts of her body.” Source said, “We think he was trying to hide her body under the trailer.”

Another source said, “She dropped her two year old son off at her mother’s. When she didn’t come back for her son she, (Rathburn’s mother), went over to her house. Rick came to the door but wouldn’t let her in. So I think she called the cops.”

Another source said, “He has a history of drug use and I don’t think he worked anywhere.”

Other sources say that after Murphy was arrested he showed no remorse.

http://openbracket.ca/author/judohippo/ Statement from the Burnsville Police Dept – The Burnsville Police Department is currently conducting a death investigation from an incident that occurred on 2/28/21 within the city limits.  Officers responded to 20 Green Mountain Drive at around 11:30pm in response to a welfare check on a resident of the apartment that was requested by a family member.  Officers had difficulty getting a response from anyone at the residence for several minutes although they could detect signs that someone was present inside the apartment.  After several minutes a male subject exited the apartment alone.  Officers checked the resident for the female occupant and found her deceased inside.  Burnsville Police requested the assistance of the State Bureau of Investigation to assist in processing the crime scene and also received significant logistical assistance from the Yancey County Sheriff’s Department.  This is an ongoing investigation and as such these are all of the details we can release at this time.

This is an ongoing story……