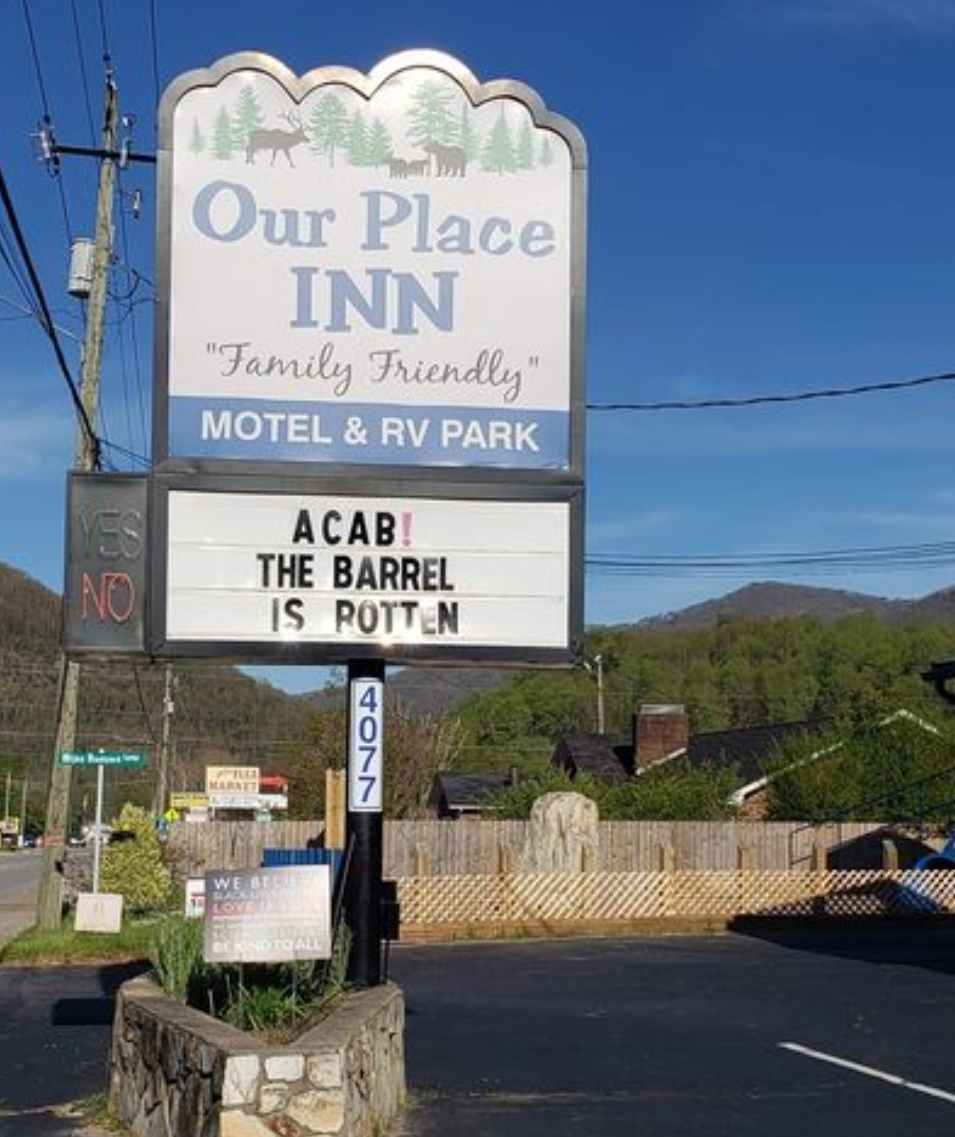 The “Our Place Inn” motel / RV Park in Maggie Valley has outraged the community concerning their advertising. The motel has posted on their sign “ACAB! The barrel is rotten”. Antifa anarchists say “ACAB” means “All Cops Are Bastards” and the words has been seen spray painted on vandalized buildings in Asheville, Portland, Charlotte, and other cities in the United States.

“We need a complete overhaul of a system that has been allowed to become corrupt from the inside.”

“If an LEO makes a mistake they need to make restitutions”

“You don’t call a plumber to rewire your house, so why aren’t you calling addiction specialists when one suggests drug use?”

Jan Marie-Money said on Facebook, “I’ll make sure I never stay at your hotel for any reason! Oh and be sure if you have trouble don’t call the police take care of it yourself!”

Julie Leonard said on Facebook, “Calling all cops Bastards and calling for police reform are two separate things. Regardless of how anyone feels about police reform, all cops are not bastards and that acronym makes the rest of your write up irrelevant. It’s pure hate speech and 100% discriminatory.”

Sonia Surret said on Facebook, “I was attacked by a drugged out homeless person at the Ramada Inn in Asheville. The city moved them in the hotel and one of them threw a Coke bottle at me when I would not give him money. The Asheville Police came and handled the situation. I don’t think a social worker could handle a drugged out person that is being violent.”

A wife of a Haywood County Sheriff Deputy, that does not want her name mentioned, said, “There is a big difference between freedom of speech and hate speech. ACAB is hate speech and America has the dead police officers to prove it. Democrats, socialists, BLM, Antifa, or what ever these people identify themselves as have been calling for the death of law enforcement since the Obama years and they have been ambushed and executed. How much longer is the public going to let this happen?”

The NC Secretary of States Office says the motel is owned by a Cody Currin.