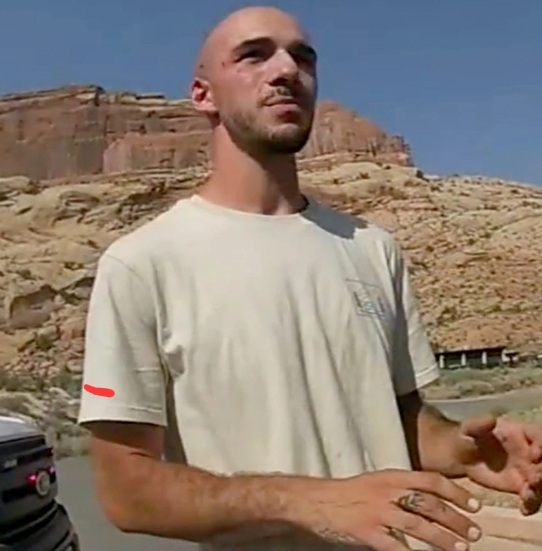 Honggang Brian Laundrie is currently wanted by the FBI for “Unauthorized Use of a Device” and is the key suspect in the death of his girlfriend Gabby Petito. Searches by the FBI and well known bond agent, “Dog The Bounty Hunter”, have led to Florida and the Appalachian Trail.


On September 29th, Skyline reported that our investigative news team believed they had found the location of Brian Laundrie in New Bern NC.
In our investigation we learned the make and model of the car seen in Madison County was not a Toyota or Chevy but was a Hyundai Sonata with the NC tag number of FKF-3705. The tag was registered to a Thomas Laundrie of New Bern NC.

Skyline also learned that a man, described as Brian Laundrie, was seen in Hot Springs with a dark haired woman in her late 20s. The two alledgedly got into a white Sonata.

Skyline president Chad Nesbitt had a friend that lived near New Bern and Nesbitt asked if he could drive by the Thomas Laundrie home. A man fitting the description of Brian Laundrie was seen wearing a red shirt, red ball cap, and a back pack. He was one block away from the Thomas Laundrie home. When Nesbitt’s friend turned around to drive by the man again he “quickly hid in the bushes”.

Nesbitt’s friend saw a police officer around the corner of Lucerne Way and pointed to the bush the man was hiding in. The officer looked at video Nesbitt’s friend took. Then marked and un-marked patrol cars started coming into the area.

Chad Nesbitt also contacted the New Bern Police Department and told them he believed his friend just passed Brian Laundrie, explained what was going on, and gave the address.

POLICE SAY LAUNDRIE IS NOT IN NEW BERN BUT QUESTIONS REMAIN –

The New Bern Police Department released this statement to local media and “almost word for word” to Skyline over the phone, “Our department became aware of the tip that Brian Laundrie was currently in the City of New Bern. New Bern police officers collaborated with the Raleigh branch office of the FBI and four FBI agents who arrived in New Bern to further the investigation. At the conclusion of our efforts, we do not believe he was, or is, in New Bern. We ask everyone to forward tips to the FBI website. The New Bern Police department continues to be vigilant in our patrols and will act accordingly.”

Chad Nesbitt asked about Thomas Laundrie who was thought to be the grandfather of Brian Laundrie. Chief Gallagher interrupted Mr Nesbitt and said, “It’s not the Grandfather. It’s the Uncle. It’s his Uncle not his Grandfather.”

Nesbitt then asked about a Jennifer Laundrie that records show lives at the Thomas Laundrie home. A long silence occurred and then a Captain Morrison Brown interupted Chief Gallagher and said, “You are asking a lot of questions and as I said before this is an on going investigation that is pretty much closed. The FBI will provide any additional information you may need.”

Chad Nesbitt said, “Brian Laundrie is not in Florida. He is in New Bern North Carolina. The FBI is simply looking for evidence and obstruction of justice charges on the parents in Florida. The Feds have New Bern NC under surveillance despite what the New Bern Police Department is saying. There are unmarked cars near the Thomas Laundrie residence. There is a helicopter flying dozens of flights over the town. That Croatan National Forest is probably looking good to Laundrie but the best thing Brian Laundrie can do is turn himself in. His actions have his entire family facing federal charges. All he has to do is walk out of that dirty hotel down the street, or stop hiding near the Lutheran church his family member used to work at, or stop hiding in that bush he was in one block from his Uncles house. All he has to do is wave at one of the unmarked cars and put it all in God’s hands for in the end God will be the judge.”

All attempts to reach Thomas Laundrie and Jennifer Laundrie have not been returned.

In the span of three years, Skyline News has found 18 people that were reported missing by law enforcement.